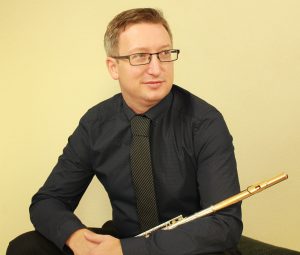 When I took up playing the recorder in my childhood, I especially liked playing modern repertoire with all the nice special effects. It stimulated my fantasy. Years later, when I started to study the flute with mostly classical repertoire, I totally forgot these great effects. I was too busy trying to control my instrument.

During one of Wil Offermans’ master classes, I again got in touch with extended playing techniques. A whole new world of possibilities opened up before me. Not only did I discover new ways of playing the flute, I also found that studying these techniques increased my control over the instrument. Furthermore, it had a very positive effect on my regular playing technique.

My slogan became: “If I can play it, I can also choose not to play it.”

I hope you wil enjoy this website and I hope you’ll find it useful!

Rogier de Pijper (1982) is a Dutch flutist. For his master studies he did research on how to incite flutists and composers to use extended techniques as new sound possibilities on the flute.