My new dentist was very clear: ‘Your wisdom teeth must come out!’ My previous dentist had been warning me for seven years that this would need to happen at some point, but I always managed to postpone it as I had been dreading the procedure. Though my teeth weren’t giving me any problems now, I decided to follow my dentist’s advice this time. The fear of fear had become greater than my fear of the actual surgery and I felt it was about time I shook this off: I had to bite the bullet. I had carefully planned it all out as the season was going to be very busy. By the end of June, I would have the first two teeth extracted and two weeks later the other two. I had worked out that if I recovered within two weeks, I would be ready for the summer, which would be packed with flute related activities. Of course, this meant I was unable to play the flute for four weeks. After these weeks, I tentatively tried to play again… I could have cried from frustration! It became clear I might not be back on form in time.

My embouchure in particular had suffered from four weeks of enforced rest. My breathing support didn’t feel natural either. Moreover, I had to get used to the new gaps in my mouth. It was time for drastic measures. I have always benefited from studying modern playing techniques, gaining fast results from them. The following two techniques have helped me enormously:

My embouchure had been weakened. To regain its strength, I realised mere lip exercise wasn’t going to suffice. The lips would be the last phase in the training process. First, my breathing and breathing support needed to be back on form. Merely working on my embouchure, without support, would simply result in tense lips.

Studying overtones assisted in strengthening my breathing support. First, I played them purely by the force of the breathing support while I tried to keep my embouchure as static as possible. Consequently, I started working on vocals combined with the support from the first exercise. This exercise helped me fine-tune my lips. Aided by these exercises I gradually became aware of the new space in my mouth.

The embouchure contains many small muscles. To become aware of them I started studying wind sounds. This way my embouchure rapidly regained its strength and flexibility. I began playing an easy tone, for example a B1. While playing this tone I then gently pushed the flute forward with my lower lip, thus creating a rasp in the sound. I kept doing this until only a rasp remained. After a deep breath through the nose, without changing my embouchure, I gradually went from rasps back to a beautiful tone.

Thankfully I managed to be back on form in time. Exciting times…

What is Flute Colors?

Get in full control of your instrument with Flute Colors. Buy the bundle and save € 15! 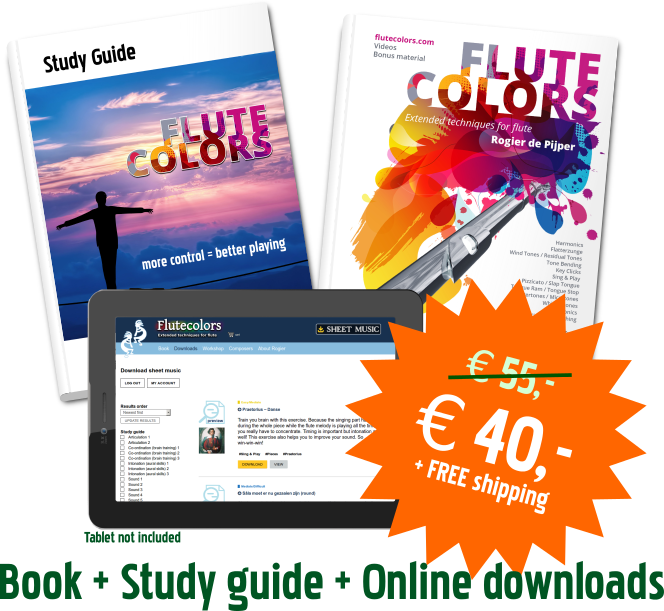