Who inspired you as a young flute player?

My first flute CD was Sir James Galway´s ”Man with the golden flute”. So: Sir James.

You studied flute in Helsinki and London. Why London?

I’ve been an anglophile of sorts for ages, and I think that going to college should be for life reasons as well as flute reasons. I wanted to stay in London for a bit for numerous reasons, so when a place opened up for doing an Erasmus exchange at the Guildhall School of Music and Drama, I  was over the moon.

What is the most important lesson you have learned during your flute studies?

At Guildhall, Sarah Newbold told me always to smile with my eyes while playing. I’ve tried to remember that ever since. A bit later on, when I’d already finished my degree,  I happened to meet the brilliant clarinetist Matt Hunt through some mutual friends a  day before I was to travel to an important audition, and he simply reminded me to have fun while auditioning. These two pieces of advice I consider the most important since they are universal and have already proven to be useful to people I’ve passed them on to!

You are now co-principal of the Tampere Philharmonic. What do you like most about playing in the orchestra?

I love the non-verbal communication and the much telling silences between the notes.

You also play in the contemporary ensemble Uusinta Ensemble. What fascinates you most about contemporary music?

Playing contemporary music let’s you not only witness what’s happening in classical music right at that moment but also to leave your mark and effect what’s to follow in the future – this happens especially when one get’s to work closely with composers.

Can you describe the difference between playing in an orchestra and in a contemporary ensemble?

In the ensemble it’s a much more intimate setting and we try to work as much as possible without conductors – and even we do, we still act as a more democratic group that we’d do in orchestra. So, there’s more responsibility in leading etc.

The ensemble sees it as its main mission to bring the most exciting composers from all countries to its concerts in Helsinki and beyond. What makes a composer exciting?

I personally think an exciting composer is some how pays respect to the past, yet in an educated and open-minded way keeps pursuing something fresh and new.

Why do you think it is important to give contemporary composers a stage?

It’s important because we as classical music composers and performers need to be seen as something  live and active (and interactive), not some phenomenon of the past that’s now collecting dust in a museum.

Do you currently have a favorite composer or favorite piece?

There’s some much to choose from, but a big hit right now for me is Dai Fujikura’s Glacier for bass flute.

You are currently a PhD student. Your focus is to explore the narrative nature of music through mental and spiritual themes. What fascinates you about this topic?

In my artistic doctorate degree I study the flautist’s personality and corporeality through the narrative elements in our repertoire. This research has opened my eyes so much about how we talk about playing, performing and how much our whole flute narrative is centered around the embouchure and the ”mystical embouchure” alone.

How has this research influenced your work as a flutist / musician so far?

It’s helping me understand myself as a performer and to analyze my work process, hopefully it’s also making me a better pedagogue!

What do you hope to achieve?

I wish to open more eyes (or ears) to see that the extended techniques, often considered modern and ”unnatural” are often in fact a means to achieve a more natural or even naturalistic soundscape.

The most proper introduction was given to me by Ian Clarke during my time at Guilhall.

What is your opinion on extended techniques for flute?

I think they should be introduced early on and used as often as possible!

Do you have a favorite technique?

Tongue ram. I also have a love-hate-relationship with whistle tones..

Can you explain why you like this technique the most?

I love them all, when they´re suited in the music and make an extension to the expressive palette in the performance!

Why do you think flutists may or may not benefit from studying extended techniques?

Often we´re adviced to sing and play to relax the throat, or to produce whistle tones to relax the embouchure and direct the air stream.. So, they are in fact greatly useful in polishing up ”non-extended” techniques as well!

Do you think we should teach young flutists extended techniques? Why (not).

The Tampere Flute Fest takes place on April 24th and 25th. If I have understood correctly, you are giving a concert with a contemporary program. Which pieces do you play?

The Ferneyhough for obvious reasons – it’s so scary to look at! For Saariaho and Ford the main point is how we need to combine different things and different effects, sometimes simultanously

Do you think it’s important to host events like the Tampere Flute Fest?

I absolutely do. Especially during times like these – I think we can all agree that nothing compares to the real live performance and interaction between individuals! 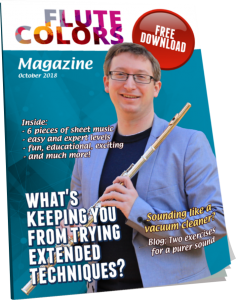